In China, saying something that authorities deem “sensitive remarks” may be labeled “anti-Party” or “anti-social” and punished accordingly.

The Chinese Communist Party (CCP) is sparing no efforts, financial and ideological alike, to intensify its control over the populace and preserve the totalitarian rule. The measures range from the revival of the Cultural Revolution methods to monitor the religious and report on them, such as the “Fengqiao Experience” to the creation of new high-tech monitoring surveillance systems, like Skynet and Sharp Eyes Project. At the same time, the Chinese authorities are closely monitoring online platforms and groups, to make sure that no critical posts or remarks detrimental to the image of the Communist Party or its leaders go unnoticed, and their authors are punished.

Deemed “reactionary” for making comments about Xi Jinping
In early 2019, a netizen in northeastern China’s Liaoning Province was summoned by the local police for forwarding a cartoon online showing President Xi Jinping holding a steamed stuffed bun. He was questioned on why he had posted the cartoon online, who instructed him to do so, and whether he was a member of “anti-government” organizations. The search of the netizen’s computer and his bank account information revealed nothing suspicious. Nevertheless, the authorities still detained him for 15 days on the charge of “picking quarrels and provoking trouble.”

A netizen from Daqing city in northeast China’s Heilongjiang Province was reprimanded and punished for posting critical remarks about Xi Jinping in December 2018. He has reportedly posted a message in a WeChat group criticizing and mocking the president for his authoritarian leadership style, comparing China’s dictatorship to that of North Korea.

His message read: “East Korea and West Korea are the only countries in the world that make their citizens learn the thoughts and ideology of their leaders. Whoever comes to power in China always concocts their ideology and theory for people to study. When Xi Jinping met with the prime minister of Japan, he even had to follow a script when uttering simple everyday phrases, revealing the immensity of his incompetence.”

As the dictatorship of the Chinese Communist Party in mainland China is becoming similar to that of North Korea, more and more Chinese netizens and the public have started referring to mainland China as “West Korea” and North Korea as “East Korea.”

The netizen was summoned to the local police station and accused of posting online remarks opposing China’s leadership and being “anti-social” and “reactionary.” His WeChat account was blocked, and he was forced to sign a statement promising not to post such messages in the future. The police threatened him, “If you ever post any reactionary messages again, once discovered, you will be detained for six months or one year.” He was also required to keep his cellphone on and be available on demand 24 hours a day.

The netizen feels terrified of being monitored by the government at every moment and is afraid of saying “wrong things” and be taken into custody. He said that the authorities’ actions show that keeping people silent is more important than anything else.

Detained by authorities for altering a slogan
In late September 2018, a resident of a village under the jurisdiction of Jiujiang city in southeast China’s Jiangxi Province saw the slogan “Do not engage in wishful thinking; do not covet money allocated for alleviating poverty” written on the wall of a village’s ancestral home – a shrine where villagers offer sacrifices to their ancestors. Believing that ordinary people would never covet money from the government, and that these words should be directed at government officials, he decided to paint over some characters making up the slogan, changing its meaning into “Engage in wishful thinking; covet money allocated for alleviating poverty” as a way to satirize the government.

Someone took a photo of the altered slogan and posted it on WeChat. In February 2019, the villager was summoned to the local police station for interrogation and was later detained for five days for “the crime of altering a slogan.”

Afterward, a local village official said, “The person who painted over those two words will always have a blemish [on his record]. In the future, if he makes the same mistake as someone else, for which the other person is imprisoned for one year, he will be imprisoned for two years. In addition, the person’s children will face difficulties if they want to take university entrance exams, join the Party, or serve in the army.”

One elderly villager lamented that this is reminiscent of the Cultural Revolution, when, if you said just one thing wrong, the CCP would denounce, humiliate, and torture you in public. 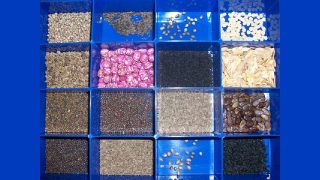