As the CCP continues its crackdown on religious belief, even objects designated as protected historical and cultural sites do not escape destruction.

During the Cultural Revolution, the Chinese Communist Party (CCP) launched a campaign to destroy the “Four Olds” – old customs, old culture, old habits, and old ideas – to get rid of everything that was connected to China’s traditions and values. The Red Guards burnt paintings and books, destroyed invaluable sculptures and antiques. Temples and tombs of historical figures were no exception: they were looted and desecrated. Under the current regime, temples of China’s traditional folk religions, as well as Buddhist and Taoist temples have once again suffered crackdowns in a manner akin to the Cultural Revolution.

Lianhua Temple in the county-level city of Dengfeng, under the jurisdiction of Zhengzhou city, in Central China’s Henan Province, was built in 1927, during the 16th year of the Republic of China (1912–1949). The temple gets its name from the Lianhua Peak, which means “Lotus Peak,” at the foot of which it is located. Covering an area of more than 7,000 square meters, with more than 60 houses, surrounded by ancient trees, this folk religion temple has been designated as a “major historical and cultural site protected by the city of Zhengzhou” in 2009. Two years later, a monument to commemorate this important event was erected in front of the temple.

But just in a few years, its status has suddenly changed from protected to persecuted. In November 2018, local officials started harassing the temple; they even burned a donation box.

But on March 15 this year, the temple suffered a much bigger setback. Officials from Dengfeng Municipal Bureau of Cultural Heritage Administration, the local United Front Work Department, and the Public Security Bureau, accompanied by over 20 personnel, stormed into Lianhua Temple. Not only did they seal it off, but also smashed its religious statues, later burying them.

The reason for the crackdown given by the officials was that the temple is associated with a “reactionary organization,” meaning “White Lotus” – an ancient Chinese folk religious movement that has been established at the end of the 13th century and later persecuted. During the Ming Dynasty (1368–1644), “White Lotus” became a generic term, describing all the groups banned as xie jiao. The people guarding the temple said that they had never heard of this religious movement: Lianhua Temple and “White Lotus” are completely unrelated.

This sudden shift of the government’s attitude and the destruction of the statues raised questions to the local population: how can a protected historical site suddenly become associated with a “reactionary organization”? Some commented that, witnessing such erratic and unreasonable actions by authorities as well as constant policy changes in China, not only the religious but all the general population are losing the sense of security.

Video: Seals were put up on the door to each of the temple’s halls and houses in Lianhua Temple.

A tourist at the site remarked that the closure of Lianhua Temple is very strange and pitiful because it was very popular. She also noted that the authorities are now prohibiting even traditional Chinese religions, such as Buddhism and Taoism, making people feel that they have stepped back into the era of the Cultural Revolution. 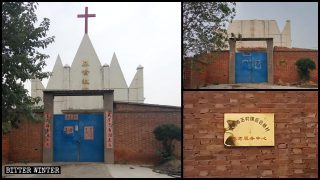