The CCP is expanding its arsenal of the anti-Muslim campaign with new, “softer” measures, hoping to conceal the real picture of religious persecution.

Linxia Hui Autonomous Prefecture in the north-central province of Gansu is home to the Dongxiang, one of China’s 56 officially recognized ethnic minorities, that are often described as Mongol in race, Muslim in religion, and Han Chinese in culture.

Huangniwan village, mostly populated by the Dongxiang and Hui Muslims, had three mosques for years. In January, however, the Muslim community lost one of them when the local authorities “merged” the congregations of Huangniwan East Mosque and Ga Mosque. The former was later turned into a shoe-making facility.

According to local Muslims, three months before the merger, the county’s United Front Work Department and the township government convened local imams and village believers on many occasions, pressuring them to let go of the mosque.

The discussions were over after a group of over ten local imams was taken to Xinjiang, under the pretense of visiting the merged mosques in the region. Back home, the imams refused to disclose the details of their trip to anyone, but stopped protesting against the joining of the two mosques. Knowing about the atrocities against the Uyghurs and other Muslim minorities in Xinjiang, village residents suspect that the authorities organized the trip with an intent to compel the imams to stop resisting by showing them a real-life example of the harshest religious persecution and what happens if Chinese authorities are disobeyed.

“Not merging isn’t an option. They conducted ideological work on us for more than three months. This is a national policy, and there’s nothing we can do about it,” said one Muslim who wished to remain anonymous.

When Bitter Winter recently visited Huangniwan village, there were two signboards at the entrance to the former mosque: “Linxia County Dexterous Shoe Manufacturing Farmers’ Professional Cooperative” and “East-West Collaboration Poverty Alleviation Workshop of Siming District, Xiamen City.” The symbols with Saudi and Arabic characteristics that once adorned the building have been removed, and the plaque with the name of the mosque directly above the entrance was painted over in black. The original Islamic-style red gate was replaced with a dark-gray iron farmhouse one.

Although not as drastic as the forceful demolition of mosques, the so-called merger is a severe infringement on the religious rights of Chinese citizens. The seemingly “soft” measures are not as easily detected; nevertheless, they are also part of China’s intense anti-Muslim campaign, disguised as the fight against terrorism. And as many examples show, not only in Xinjiang. 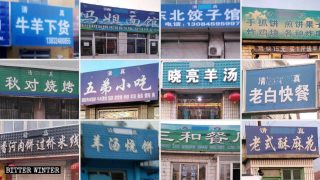 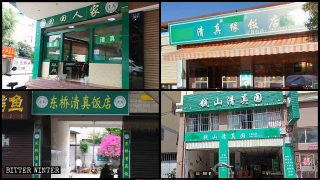 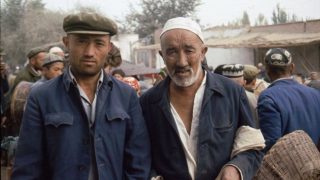 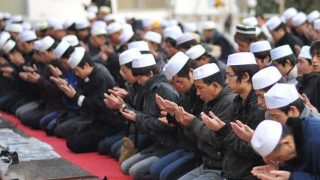