Scholars from eight countries hail Tiananmen and Religious Persecution in China as a valuable tool for both classrooms and human rights events. 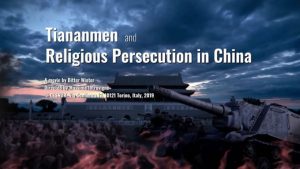 Few scholarly conferences open with a movie. But this is what happened on May 16 at Central European University in Budapest, Hungary. At the opening of an international conference on religious persecution, scholars from eight countries, NGO leaders, and students gathered to watch Tiananmen and Religious Persecution in China, a 18-minute movie produced by Bitter Winter.

Scholars were moved to tears while dramatic images of the students’ massacre in Tiananmen Square on June 4, 1989 conjured up memories of the tragedies of thirty years ago. Then, the second part of the movie asked provocative questions on how Tiananmen influenced both the religious revival in China and the renewed crackdown on religion that is still going on under President Xi Jinping.

The cruel repression in Tiananmen Square persuaded many Chinese that the CCP was incorrigible. Some turned to religion, causing both a revival in Protestant house churches and the birth of large Christian new religious movements, including The Church of Almighty God, which was founded in 1991. Tiananmen, combined with events in Eastern Europe and Afghanistan, also persuaded the CCP that, unless controlled and repressed, civil society’s unrest and religious revival could lead to the demise of Communism, as it happened in Poland, Lithuania, and elsewhere.

The reaction was more control and more repression of religion, which went from bad to worse from Jiang Zemin, who became CCP’s secretary immediately after Tiananmen, to Xi Jinping. The same executioners who had killed (according to Western scholars’ count) 10,000 protesters in 1989, imprisoned, tortured, and killed hundreds of thousands of Uyghurs and other Muslims, Tibetan Buddhists, dissident Catholics, house church Christians, members of Falun Gong and The Church of Almighty God, Taoist and Buddhists who tried to defend their temples against destruction. The movie tells this sobering story, and includes some of Bitter Winter’s signature photographs and videos.

“This is a precious tool for teaching students about religious persecution,” commented W. Cole Durham, founder of the International Center for Law and Religion Studies at Brigham Young University, Provo, Utah. Scholars from several countries requested copies of the movie for use in their classrooms. Professor Massimo Introvigne, editor-in-chief of Bitter Winter urged NGOs to screen the movie in public events commemorating the thirtieth anniversary of the Tiananmen tragedy.

During the conference in Budapest, devoted to Mapping Pathways of Persecution, several speakers denounced religious persecution in China, including Jan Figel, European Union’s Special Envoy for Promoting Freedom of Religion and Belief outside the European Union, and Professor Introvigne himself, who presented the story of religious persecution in China from the Empire to the Republic and Communism, and from Chairman Mao to Xi Jinping.

How to screen the movie Tiananmen and Religious Persecution in China in your classrooms and events. The movie is not available on the Web, but Bitter Winter is happy to let college and high school professors use it in their classrooms, and NGOs, religious organizations, and other non-profit groups screen it during their events, under the condition that the movie should not be posted on the Web nor duplicated. Please contact info@bitterwinter.org.