As in other areas of China, the persecution of this Christian new religious movement in the eastern province of Shandong has intensified considerably this year.

The Church of Almighty God (CAG) is the largest Christian new religious movement in China that has continuously suffered from brutal suppression at the hands of the CCP since its founding in 1991. It is the single most persecuted religious group in China. As evidenced by the increasing number of imprisoned CAG members in 2019, the persecution against the Church is intensifying even more. From January to November, the number of sentenced CAG members totaled 840, compared to 392 in 2018.”

The eastern province of Shandong is one of the areas in China where the CAG is most severely persecuted – 1,180 have been arrested so far this year. Compared to 2018, the number of sentenced CAG members in the province has nearly doubled: from 81 in 2018 to 145 during 11 months of this year. Most of them have been detained as a result of unified arrest operations and later sentenced during mass trials. The state has plundered a total of 3,320,000 RMB (about $ 474,000) of church assets and personal valuables.

On October 31, 25 CAG members were tried by the People’s Court of Boshan district in Zibo city and sentenced to prison based on article 300 of the Chinese Criminal Code – CCP’s secret weapon of religious persecution, widely applied to movements and groups that are listed as xie jiao, especially severely against the CAG. 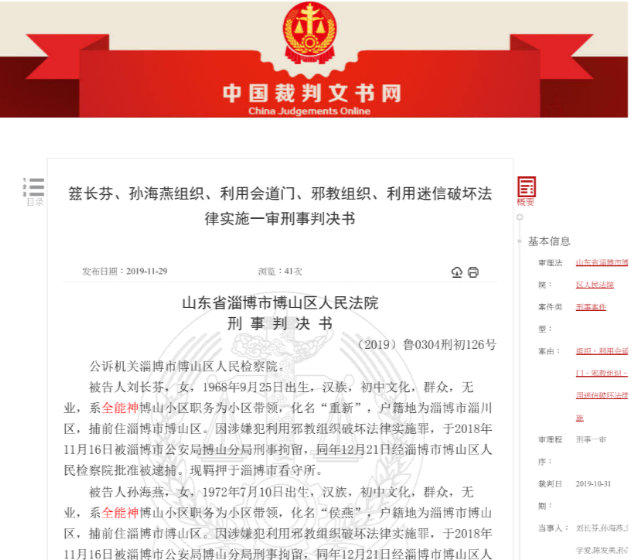 During the trial, Liu Changfen, a CAG member, refuted the accusations against her, but the court disregarded her statements and eventually sentenced her to eight years and six months in prison and imposed a fine of 50,000 RMB (about $ 7,000), claiming that she was a “leader in the Church.”

One doesn’t have to be a CAG leader to be harshly punished. Under Article 300, it is enough to be pronounced guilty of “using a xie jiao” merely for possessing CAG literature. As a rule, even regular Church members are given hefty sentences. Sun Ping from the group sentenced on October 31, was given seven years and six months in prison and a fine of 40,000 RMB (about $ 5,800) just for hosting CAG members at home.

The suffering of CAG members starts in detention, even before they are sentenced to prison. “I am the eldest in the cell, but the prison boss beats me constantly,” a 78-year-old CAG member recalled his experience in detention during the trial. The judge immediately interrupted him, not wanting to put on official record how the elderly man was tortured.

A CAG member told Bitter Winter that the 25 believers were arrested on November 15, 2018, during one of the unified arrest operations targeting the CAG.

On September 26, the People’s Court in Zhangdian district of Zibo city held a secret trial and handed down the sentence to 23 CAG believers who were also arrested on November 15, 2018. According to an inside source, the hearing was held in private because there were minors among the arrested believers, all of whom were detained and deemed guilty only for learning video editing skills in the Church.

On September 30, 15 CAG members were sentenced in a mass trial in Shandong’s Qingdao city. Among them, the Church leader and co-workers were sentenced to prison from 7 years to 7 years and six months. Even a believer in her sixties who has cancer was sentenced to two years and six months on probation. The fine imposed on them amounted to 180,000 RMB (about $ 25,000). All the believers had been under secret police surveillance for a year before the arrest.

On October 16, six CAG members from Shandong’s Jining city were found guilty for participating in the production of religious videos, five among them were sentenced to three years or more. All of them were arrested because they were searching for “sensitive” information online, the police claimed.

Meanwhile, in 2019, 104 CAG members were sentenced in the Xinjiang Uyghur Autonomous Region, some to 11 and 12 years in prison, and 113 in the eastern coastal province of Jiangsu.

The arbitrary detention and imprisonment of CAG members have aroused concern and denunciation from the international community. At an event about religious persecution in China, organized in the European Parliament on June 27, 2018, Dr. Aaron Rhodes, president of the NGO FOREF Europe, said: “As human rights activist, I consider the denial of religious freedom, including the persecution of members of The Church of Almighty God, and the denial of other fundamental human rights in China as paramount problems in the world today.”

In a letter of December 10, 2019, 29 Lithuanian MPs and a member of the European Parliament wrote to China’s President denouncing the repression of all religions, calling on him to discontinue the persecution of religions and their adherents, including The Church of Almighty God, the Uyghurs, Tibetans, and Falun Gong, and others.