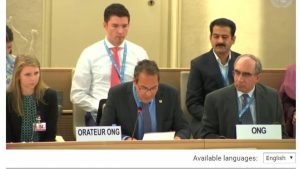 I am talking on behalf of seven NGOs. We are deeply concerned about the situation of The Church of Almighty God (CAG), a Christian new religious movement, which has four million members in China according to the governmental sources.

The CAG is classified as a xie jiao, whose correct translation is “heterodox teachings.” According to Article 300 of the Chinese Criminal Code, being active in a xie jiao is punished with a jail term of three to seven years “or more.” There is no clear definition of xie jiao and, for all practical purposes, are regarded as xie jiao the groups included in the corresponding list, periodically updated.

Those arrested and sentenced under Article 300 are not accused of any crime other than being an active member of a banned organization. It is a typical case of a crime of conscience, where somebody is punished for a belief.

The magazine Bitter Winter reported the case of Ms. Yang Shihua, who fled to Korea due to CCP’s persecution and believed that the fact that she was a CAG member was not known to the authorities. She flew back to China in May 2018 for medical treatment that was too expensive for her in South Korea, but was immediately detained when she landed in Beijing, citing Article 300.

In connection with the Universal Periodic Review of China, our NGOs have submitted evidence of torture and suspicious deaths while in custody of CAG members.

China also promotes a persistent campaign of fake news against the CAG. They are still accused of crimes they did not commit, including killing a woman in a McDonald’s in 2014, after scholars have demonstrated that the crime was committed by a different religious movement, with a similar name.

We urge China to respect religious liberty and stop the persecution of The Church of Almighty God.