Ms. O Myung-ok, the notorious Korean anti-cult and pro-CCP activist, attacks the June 20 conference organized by Bitter Winter and claims Islam “is not one of the world’s major religions”.

Readers of Bitter Winter are familiar with Ms. O Myung-ok, the notorious Korean anti-cultist and pro-CCP activist. We even devoted a successful movie to her unsavory activities. They include publishing, illegally, the pictures and names of refugees of The Church of Almighty God living in Korea, co-operating with the CCP in false demonstrations against the same refugees, and publishing books in Korean to spread CCP propaganda against Falun Gong.

She was mentioned in the conference Bitter Winter co-organized in Seoul on June 20 as an egregious example of how bigotry and hate speech harm refugees, and society in general, in Korea.

She sent some friends to take pictures at the conference, and has now published a report on her Web site churchheresy.com (the name already tells it all, as it implies that she is “the Church” and all those who disagree with her represent “heresy.”)

It is an extraordinary article, where Ms. O shows her true colors. Apart from insulting Bitter Winter for, allegedly, disseminating false information (she does not provide examples), Ms. O implies that the conference was co-organized by Falun Gong and offers a long tirade against this movement. In fact, Falun Gong was not among the co-organizers of the conference, there were no Falun Gong speakers, and certainly the doctrines of Falun Gong she criticizes at length were not discussed. The CCP, however, asks that Falun Gong be routinely attacked when discussing religions hostile to the CCP, and Ms. O routinely complies.

It is also very interesting to read that Ms. O., who repeats her shameful and unchristian attacks against The Church of Almighty God refugees in South Korea, asks that they should be dealt with in cooperation with the Chinese government. We told our readers all along that Ms. O promotes cooperation with the Chinese government and the CCP, but it is nice to hear it confirmed from her own voice.

There is also the fantastic claim that “extremist” Uyghur Muslims participated in the conference, with the usual CCP claims of alleged Uyghur support for fundamentalism and terrorism. In fact, Ms. Nurgul Sawut of Campaign for Uyghurs spoke at the conference. Campaign for Uyghurs is a secular rather than a religious organization. Had Ms O studied at least some first basic facts about Islam, she would have understood that a woman appearing in public without a veil cannot be part of “fundamentalist” or “extremist” Islam.

All Ms. O has to say about Islam is that “it does not recognize the Holy Spirit,” and “distorts” the theology about the same Holy Spirit. Ms. O, whose credentials as an expert of comparative religion are unclear, ends up by offending Muslims in general and concluding that “it is reasonable to regard Islam as a heresy of Christianity rather than acknowledging it as one of the world’s three major religions.” Hate speech and bigotry, indeed. 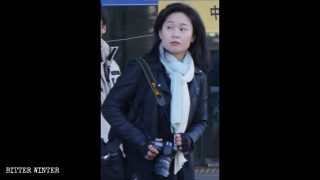 Story of O: Korea #1 Bigot Harasses Refugees (and Many Others)—Again