(Job 1:6-11) Now there was a day when the sons of God came to present themselves before Jehovah, and Satan came also among them. And Jehovah said to Satan, From where come you? Then Satan answered Jehovah, and said, From going to and fro in the earth, and from walking up and down in it. And Jehovah said to Satan, Have you considered my servant Job, that there is none like him in the earth, a perfect and an upright man, one that fears God, and eschews evil? Then Satan answered Jehovah, and said, Does Job fear God for nothing? Have not you made an hedge about him, and about his house, and about all that he has on every side? you have blessed the work of his hands, and his substance is increased in the land. But put forth your hand now, and touch all that he has, and he will curse you to your face.

(Job 2:1-5) Again there was a day when the sons of God came to present themselves before Jehovah, and Satan came also among them to present himself before Jehovah. And Jehovah said to Satan, From where come you? And Satan answered Jehovah, and said, From going to and fro in the earth, and from walking up and down in it. And Jehovah said to Satan, Have you considered my servant Job, that there is none like him in the earth, a perfect and an upright man, one that fears God, and eschews evil? and still he holds fast his integrity, although you moved me against him, to destroy him without cause. And Satan answered Jehovah, and said, Skin for skin, yes, all that a man has will he give for his life. But put forth your hand now, and touch his bone and his flesh, and he will curse you to your face.

These two passages are a dialog between God and Satan, and they record what God said and what Satan said. Did God say very much? (No.) He did not speak much, and spoke very simply. Can we see the holiness of God in God’s simple words? Some will say “This is not easy.” So can we see the hideousness of Satan in its replies? (Yes.) So let us first look at what kind of question Jehovah God asked of Satan. (“From where come you?”) Is this a straightforward question? (Yes.) Is there any hidden meaning? (No.) It is just a question, pure, with no other purpose. If I were to ask you: “Where do you come from?” how then would you answer? Is it a difficult question to answer? Would you say: “From going to and fro, and from walking up and down”? (No.) You would not answer like this, so how then do you feel when you see Satan answering in this way? (We feel that Satan is absurd and crafty.) You feel this way? Can you tell what I am feeling? Every time I see these words I feel disgusted. Do you feel disgusted? (Yes.) Why disgusted? Because it talks without saying anything! Did it answer God’s question? (No.) Why? Its words were not an answer, they had no outcome, right? They were not an answer directed at God’s question. “From going to and fro in the earth, and from walking up and down in it.” Tell Me, do you understand these words? Do you? So where on earth does Satan come from? Have you received an answer to where it has come from? (No.) This is the “brilliance” of Satan’s cunning, not letting anyone discover what it is actually saying. Having heard these words you still cannot discern what it has said, yet it has finished answering. Perhaps it believes it has answered perfectly. How then do you feel? Disgusted? (Yes.) Disgusted, right? Now you start to feel disgust with these words. Satan does not speak directly, leaving you scratching your head and unable to perceive the source of its words. It speaks deliberately, cunningly, and is dominated by its own essence, its own nature. Satan did not consider these words for a long period of time; it expressed them naturally. As soon as you ask it where it comes from, it uses these words to answer you. “Where on earth does it come from?” You feel very puzzled, never knowing where it is from. Are there any among you who speak like this? (Yes.) What kind of way is this to speak? (It is ambiguous and does not give a certain answer.) What kind of words should we use to describe this way of speaking? It is diversionary and misleading, isn’t it? Some people speak this way. You ask someone: “I saw you yesterday. Where were you going?” They do not answer you directly to say where they went yesterday. They say “What a day it was yesterday. So tired!” Did they answer your question? That is not the answer you wanted, is it? This is the “brilliance” of man’s artifice. You can never discover what they mean or perceive the source or intention behind their words. You do not know their heart because in their heart they have their own story—this is insidiousness. Do you also often speak this way? (Yes.) What then is your purpose? Is it sometimes to protect your own interests, sometimes to maintain your own position, your own image, to keep the secrets of your private life, to save your own reputation? Whatever the purpose, it is inseparable from your interests, linked to your interests, isn’t it? Is this the nature of man? (Yes.) So is not everyone with this kind of nature akin to Satan? We can say this, can’t we? Generally speaking, this manifestation is detestable and abhorrent. You also now feel disgusted, don’t you? (Yes.) This represents the craftiness and evil of Satan.

Looking again at the first passage, Satan responds again to Jehovah, saying: “Does Job fear God for nothing?” It starts to attack Jehovah’s assessment of Job, and this attack is colored by hostility. “Have not you made an hedge about him, and about his house, and about all that he has on every side?” This is Satan’s understanding and assessment of Jehovah’s work on Job. Satan assesses it like this, saying: “you have blessed the work of his hands, and his substance is increased in the land. But put forth your hand now, and touch all that he has, and he will curse you to your face.” Satan ever speaks ambiguously, but here it speaks with certainty. These words spoken with certainty are an attack, a blasphemy and a rivalry to Jehovah God, to God Himself. How do you feel when you hear it? Do you feel aversion? (Yes.) Are you able to see its intentions? First of all, it repudiates Jehovah’s assessment of Job—one that fears God and shuns evil. Then it repudiates everything Job says and does in fear of Jehovah. Is it accusatory? Satan is accusing, repudiating and doubting all Jehovah does and says. It does not believe, saying “If You say things are like this, how come I have not seen it? You have given him so many blessings, how can he not fear You?” Is this not a repudiation of all that God does? Accusation, repudiation, blasphemy—are its words not aggressive? Are they a true expression of what Satan thinks in its heart? (Yes.) These words are certainly not the same as the words we read just now: “From going to and fro in the earth, and from walking up and down in it.” They are completely different from those. Through these words, Satan completely lays bare the attitude toward God and the loathing of Job’s fear of God that it holds in its heart. When this happens, its maliciousness and evil nature are completely exposed. It loathes those who fear God, loathes those who shun evil, and even more so loathes Jehovah for bestowing blessings on man. It wants to use this opportunity to destroy Job whom God raised with His own hand, to ruin him, saying: “You say Job fears You and shuns evil. I see it otherwise.” It uses various ways to provoke and tempt Jehovah, and uses various ways so that Jehovah God hands Job over to Satan to be wantonly manipulated, harmed and handled. It wants to take advantage of this opportunity to exterminate this man who is righteous and perfect in God’s eyes. Is its having this kind of heart a momentary impulse? No, it is not. It has been long in the making. God works, God cares for a person, looks upon a person, and Satan dogs His every step. Whoever God favors, Satan also watches, trailing along behind. If God wants this person, Satan would do everything in its power to obstruct God, using various evil ways to tempt, harass and wreck the work God does in order to achieve its hidden objective. What is its objective? It does not want God to have anyone; it wants all those that God wants, to possess them, control them, to take charge of them so they worship it, so they commit evil acts alongside it. Is this not Satan’s sinister motive? Normally, you often say that Satan is so evil, so bad, but have you seen it? You can only see how bad man is and have not seen in reality how bad Satan actually is. But have you seen it in this issue concerning Job? (Yes.) This issue has made Satan’s hideous countenance and its essence very clear. Satan is at war with God, trailing along behind Him. Its objective is to demolish all the work God wants to do, to possess and control those whom God wants, to completely extinguish those whom God wants. If they are not extinguished, then they come to Satan’s possession to be used by it—this is its objective. And what does God do? God says only a simple sentence in this passage; there is no record of anything more that God does, but we see there are many more records of what Satan does and says. In the passage of scripture below, Jehovah asked Satan, “From where come you?” What is Satan’s answer? (It is still “From going to and fro in the earth, and from walking up and down in it.”) It is still that sentence. Tell Me, how has it become Satan’s motto, Satan’s masterpiece? Is Satan not hateful? Saying this disgusting sentence once is enough. Why does Satan always come back to this sentence? This proves one thing: Satan’s nature is unchanging. Its hideous face is not something it can keep hidden for long. God asks it a question and it responds in such a way, never mind how it treats people! It is not afraid of God, it does not fear God, and it does not obey God. So it dares to be unscrupulously presumptuous before God, to use these same words to whitewash over God’s question, to use this same answer to reply to God’s question, to attempt to use this answer to confound God—this is the ugly face of Satan. It does not believe in the almightiness of God, does not believe in the authority of God, and is certainly not willing to obey under the dominion of God. It is constantly in opposition to God, constantly attacking all God does, attempting to wreck all God does—this is its evil objective.

from “God’s Work, God’s Disposition, and God Himself IV” 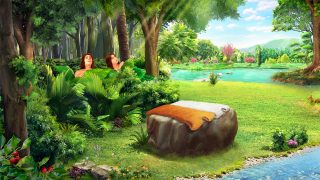 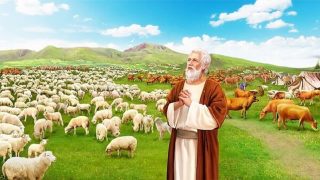