On August 7, 2018, the Luoning County Party Committee in Henan’s Luoyang city held an emergency meeting, which resulted in a document outlining a plan for the suppression of religious beliefs, starting with the demolition of church crosses.

At the meeting, the Committee’s leader expressed concern that there were only around 30,000 Communist Party members and over 80,000 Christians in the county; and there are some Christians among the Party members. “All these facts pose a serious crisis to the state regime,” he said.

He informed the attendees that he had received orders from his superiors to start the dismantling of church crosses and shutting down churches throughout the county. “There are 79 Three-Self churches (government-approved Protestant churches) in the entire county. Only 30 churches will be left; all the other churches must be shut down.”

He also emphasized that the authorities must arrest those who believe in God, adding that the operation should be carried out in secret; anyone who is discovered to have leaked information would be removed from office.

The dismantling of church crosses in Luoning county started immediately after the meeting.

On August 17, the United Front Work Department (UFWD) forcibly removed the cross on a Three-Self church in the Xijie community of Chengguan town. The church’s Pastor Liang tried to stop them but to no avail.

On August 23, the cross on a Three-Self church in Jingyang town was also forcibly dismantled. That day, a group of over ten officials, led by the deputy secretary of the county’s Party Committee, arrived at the church and ordered the church to be shut down on the absurd grounds that the church entrance faced the gate of the Village Committee.

On August 24, the authorities forcibly removed the cross from a Three-Self church in Madian town. A local official said that crosses must not surpass the height of the church building.

The same day, under the command and supervision of the county’s UFWD director, the cross on a newly built Three-Self church in Zhaocun town was secretly removed.

According to some calculations, within just one week from August 17 to 24, crosses were forcibly removed from at least nine churches in Luoning county.

Video: Scene of the cross being removed from a Three-Self church in Xijie community, Chengguan town. 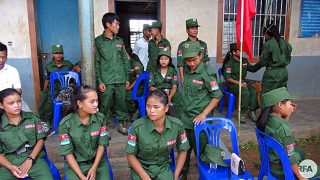 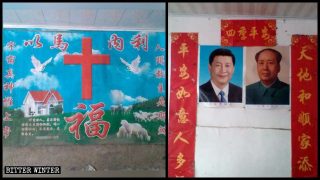 People on Social Welfare Ordered to Worship CCP, Not God 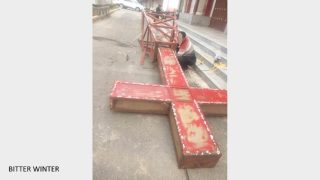