The Church of Almighty God’s Refugees in Japan: A Statement at the United Nations 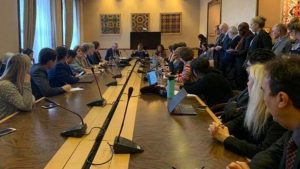 No refugee of The Church of Almighty God has been granted asylum in Japan, a country with a very restrictive policy on refugees in general. The situation has been discussed at the United Nations

As of January 2019, 270 members of The Church of Almighty God (CAG), a Chinese Christian new religious movement, have escaped China and applied for asylum in Japan. None of the requests has been granted.

That the CAG is ruthlessly and cruelly persecuted in China is an established fact. The CAG claims that more than 300,000 of its members have been arrested, and scholars regard the figure as credible. There are hundreds of published Chinese court decisions showing that CAG members have been sentenced to heavy jail penalties for the only circumstance of being active in a banned religious organization. NGOs have also reported instances of torture, extra-judicial killings, and organ harvesting.

Japan is well-known for its restrictive policy on refugees in general. According to the Japan Times, in 2017 Japan received 19,628 asylum requests, and only 20 were accepted. The situation increasingly concerns international observers.

At the 40th session of the United Nations’ Human Rights Council (25 February–22 March 2019), the French NGO CAP-LC (Coordination des associations et des particuliers pour la liberté de conscience), which is among the NGOs accredited at the United Nations’ Economic and Social Council (ECOSOC), has submitted a written statement on the situation of the CAG refugees in Japan, published on the United Nations’ official Web site. An oral discussion will follow.

The statement mentions the fake news spread against the CAG, including by some Japanese media, and analyzes various reasons why in Japan CAG refugees are not granted asylum.

“Asylum is often denied in Japan,” the statement notes, “because the individual CAG refugee cannot prove to have been personally persecuted. However, under the Geneva Convention it is not necessary that the asylum seeker proves that she or he has been actually persecuted. A credible ‘fear of persecution’ is enough. That being a member of the CAG in China means being in fear of being persecuted should be obvious.”

“Some, however, object, continues the statement, that, if they were really persecuted, the refugees should have been arrested.” CAP-LC comments that “the CAG in China is a huge, million-members clandestine religious movement. Chinese authorities admit they have identified only a minority of CAG members and in fact rewards to those denouncing CAG members to the police (some of these reward offers are advertised on the Internet, and concern any CAG member, not the leaders only). CAG devotees may escape arrest for years by moving from province to province and are protected by CAG underground networks and by family networks, which are important in China. Some tend not to believe the references to family networks, as they may have read on the Internet that the CAG is ‘against the family’ and that members are required to break ties with their families. However, scholars have proved that this is part of the fake news campaigns. Actually, the CAG’s holy scriptures have a positive view of the family, and most Chinese members have been converted by relatives.”

A further comment in the statement is that “most CAG refugees are middle class or students, with a lot to lose by leaving China. They do not take the decision to flee abroad lightly, and only when they have credible warnings that they may be arrested soon. Since they have all see members of their local CAG communities (who may often be their relatives) arrested and sentenced to heavy jail terms, their fear of arrest and persecution is very much credible.”

Another frequent objection is dealt with in the statement. “Some object that, if the refugee was persecuted, a passport should not have been issued. The objection obviously does not apply to those CAG members who had not been identified by the authorities. have may exploit loopholes in the Chinese electronic police system called Policenet (they are wider than some Internet reports prepared by NGOs claim), or the widespread corruption in China, where buying a passport is always possible. According to the U.S. State Department, millions of cases of police and administrative corruption are reported every year in China. A significant number concerns false or irregular passports. If the officer is corrupted, any problems connected fingerprints may also be overcome. A study by Pier Luigi Zoccatelli, an Italian academic specialized both in new religious movements and Chinese immigration, has clarified that controls in Chinese airports are ineffective, notwithstanding all the hypes on the Chinese prodigies of facial recognition, and may be easily eluded.”

“The conclusion is inescapable,” the statement finishes, “that refugees of the CAG fleeing China and seeking asylum in Japan should be granted it. We acknowledge and respect the problems of Japan in dealing with a high number of asylum requests. However, the members of the CAG seeking asylum in Japan, whose number (270) should not create a national problem, runs the serious and sentenced to heavy jail penalties, or worse, should they be sent back to China. We urge Japan, a country widely respected for its commitment to human rights, to lend its helping hand to the refugees of The Church of Almighty God.”