The former leader of The Church of Almighty God in four Chinese provinces is free in the United States, but her mother has been killed and she cannot contact her elderly father in China. 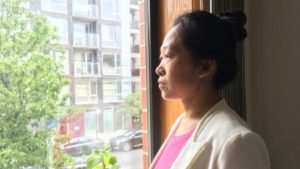 Editorial note: Bitter Winter readers are familiar with the story of Sister Zou Demei. In the United States, June 16 is Father’s Day. In this article, she talks about her father and how the persecution prevents her from contacting him.

All my family belongs to The Church of Almighty God. In 2002, we learned that the police had identified us as members of the Church, and my father will soon be arrested on the three charges of being a “political criminal,” a “counter-revolutionary,” and “engaged in the subversion of state power.” I will be arrested too, together with my mother and my three sisters. We went our separate ways. I was on the run for ten years and only in 2012 saw my father again.

In 2012, I secretly traveled to the city where my parents lived. At the time, they were hiding in a small, dilapidated and rudimentary room. I pulled the curtains open and said: “Dad, mom, I’m back!” Upon seeing me, they were surprised. “Child, is it truly you?” I held back the tears, and saw my father wiping his tears away with a handkerchief. I knew that he missed me very much. My father suffered from a stomach ailment and had to lie in bed. A soft breeze gently blew his graying hair. As I looked at his puffy eyes, I felt a sense of sorrow. I really wanted to stay beside him and fulfill my filial duties. He could tell what I was thinking, and thus told me that there were brothers and sisters from The Church of Almighty God taking care of him and visiting him, and told me to rest assured and leave again for my own security.

As the seasons changed, by the time I saw my elderly parents again, another four years had already passed. As my mother carefully opened the door and poked her head out, I saw that her face was covered with wrinkles. She anxiously pulled me into the room. Upon seeing me, my father was tearful. He insisted on buying me some delicious food, and so, after dressing up in a disguise, he stepped out the door. My mother said, “Your dad hasn’t gone out for a very long time. You are here today, so he is so happy.”

My mother and I waited at home for a long time. Neither of us saw my father come home. We stood anxiously in front of the window and looked out. Soon, we saw my father standing across the street, carrying a big bag of food. Looking at his somewhat curved back, my heart was filled with pain, and my eyes became blurry from tears. My father had become old indeed.

I told my parents that I was planning to escape abroad to seek asylum. As I was leaving, I saw the reluctance in my parents’ eyes. Perhaps they had a premonition that it wouldn’t be easy for us to see each other again. My mother asked me, “Child, when can we see each other again?” I replied, “Mom, wait until after the CCP collapses, and we will see each other again.” As I walked downstairs, my parents didn’t dare to walk with me to see me off. They just stood at the top of the stairs and looked at me with a look of reluctance at our parting. I looked back and waved to them. When I got into the car, my parents stood by the window and waved at me from behind the glass. I was very sad in my heart, but had no choice but to leave with tears in my eyes. This reunion, which lasted less than three hours, was the last time I saw my parents.

My Mother Was Persecuted to Death

From 2002 to 2016, I lived in hiding for 14 years, or 5,110 days. Life on the run made me grow accustomed to counting the days. My desire for freedom grew stronger and stronger. Fleeing to a democratic country to seek asylum became my only way out. With God’s protection, I evaded the police’s surveillance, and fled overseas successfully. The readers of Bitter Winter know my story in the United States, and I do not to repeat it here. What I want to comment about, in this sad Father’s Day, is the fate of my parents.

While in the United States, I received news that my mother had been persecuted to death by the CCP police. On June 27, 2018, the police used satellite positioning to locate the house where my parents lived, and took my parents to the local Public Security Bureau. My parents had been in hiding for 16 years, and the police actually pursued them for 16 years. After being arrested, my parents never saw each other again. The police questioned my father about where he received books of The Church of Almighty God from, the Church’s finances, and the number of Church members. They also pressured him to give up the whereabouts of my two sisters and me, but he didn’t say anything. A few days later, four police officers put my father into a police car and took him to the intensive care unit at a hospital. There, my father saw my mother. She lay still, and no matter how much my father called out to her, she didn’t respond. Sad and anxious, my father realized she was dead and fainted to the floor on the spot.

The police controlled my father. To shirk responsibility, they tried to force my father to sign a document of which he didn’t know the content. After hearing the news of my mother’s death, my father fainted again. Two police officers seized the chance to grab his hand and sign the document, then affixed his fingerprint. The police also prohibited my father from revealing his arrest and my mother’s death to anyone.

Upon learning that my mother had been persecuted to death by the CCP, I burst into tears. This was the first time I burst into tears since I first went into hiding in 2002. During the days when I was on the run and hiding in various places, I grew accustomed to burying the pain in my heart. Even during the period when I was detained in the United States, I just quietly shed tears no matter how distressed or sad I was. However, when I heard the news that my parents had been arrested by the CCP and that my mother had been persecuted to death, I could no longer restrain my inner sadness, and I wept disconsolately.

For my father, my mother’s death was undoubtedly a heavy blow. My father once said he was very glad that he and my mother could believe in Almighty God and share the gospel together. He had hoped that he and my mother could continue together along the path of belief in Almighty God, but this cannot be achieved anymore now. When other family members saw my father again, he was already emaciated. They had no choice but to carry him away on a stretcher.

I Miss My Father – A Lot

During that time, every day, I endured the pain of not being able to see my mother one last time and being unable to take care of my elderly father for the rest of his life. I saw a photo of my father from a sister of the Church. Looking at this emaciated old man, I didn’t even recognize him for a while. He is my father who loves me the most. My mother passed away, we three sisters weren’t by my father’s side, and he is in poor health. How will he spend the remainder of his life? As I think about these things, I have no feeling to eat or sleep. As soon as I close my eyes, I reminisce about how my parents were by my side when I was young. Sometimes, I even dream about scenes of my parents being tortured. After awakening, I’m already in a cold sweat.

The CCP is still keeping my father under strict surveillance. I would like to contact my father through the Church, but it is very difficult to do so. I don’t know my elderly father’s current predicament or whether he is safe. All I can do is hope each day that he can survive and can live a quiet life in the Church. I hope that I can see my elderly father again one day. Perhaps this is just my wishful thinking, but I pray to God my wish will one day come true.