When members of the congregation refused, authorities in Shaanxi still destroyed a state-approved Protestant church, under a trumped-up pretext.

The construction of a Three-Self church on Shengli Road in the Jintai district of Baoji city, in the northern province of Shaanxi, was funded by believers. Its Western architectural style gave it an impressive appearance; but not anymore: on April 2, local authorities started the demolition of the church.

A four-story annex to the church, meant to be used as a nursing home, was first to go. Even though it was still under construction. According to an eyewitness, on the day of the demolition, police officers surrounded the church as three bulldozers were destroying the building.

Two days later, the cross and a triangle structure at the top of the main church building were dismantled. Up to this point, believers still hoped that the church could survive. However, two weeks later, the roar of bulldozers completely shattered the believers’ last hope, as the church was turned into a pile of ruins.

According to sources, the demolition procedure was strictly controlled and supervised by three levels of government: officials from provincial, municipal, and district institutions were present on site. The area around the church was cordoned off under the pretext of “carrying out construction work,” personnel wearing red armbands guarded each intersection in the area. Anyone not related to the demolition was prohibited from entering the scene. All vehicles were forced to make a detour, and personnel were taking turns keeping watch over the area 24 hours a day.

To prevent information from spreading, the authorities strictly controlled the scene: People were stopped to check the content of their mobile phones, making sure that no photos of the demolition had been taken.

Members of the congregation told Bitter Winter that the harassment started already in mid-March when one of the church’s pastors was placed under house arrest. Every day from 8:00 a.m. to 2:00 a.m., police and Religious Affairs Bureau officials took turns pressuring him to agree to the church’s demolition. Exhausted by the constant persecution, the pastor fell ill and was later sent to the hospital for treatment.

The authorities didn’t stop there: they obtained the list of church personnel and summoned more than 100 key staff members, management-level deacons, and some church’s choir members to make them sign – through threats and coercion – a document agreeing to have the church demolished.

Commenting on the fate of the church, a resident said that because of the large number of believers in China, President Xi Jinping thinks that not enough people believe in him – this is why the government is eliminating churches. 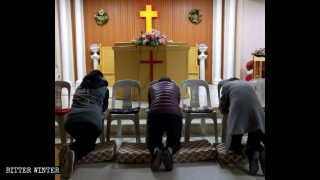 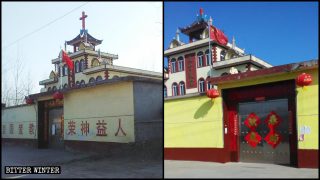