Who Needs Religion? Buddhists Pressured to Be More Political

Communist propaganda echoes from inside temples, as places of worship are turning into Party indoctrination centers. CCP-supported abbots lead the way.

The sweeping “sinicization” policy is oppressing even religions that the Chinese government generally has viewed as part of the country’s traditional culture. Buddhist deities have been replaced with national flags, portraits and statues of Mao Zedong, and propaganda posters, while the CCP ideology and policies have supplanted Buddhist teachings and chants.

The political saturation of religion, it seems, is supported by government-approved Buddhist leaders. “The report of the 19th National Congress is the contemporary Buddhist scripture,” proclaimed Shi Yinshun, the vice president of the China Buddhist Association at the end of 2017. “I’ve copied it by hand three times, and I’m planning to copy it ten more times.”

Why Buddhism? Let’s talk about politics

On May 19 this year, at a Buddhist temple in Hanzhong city of the northwestern province of Shaanxi, an abbot ordered the congregation of about 60 believers to be “politically reliable, follow the Party, and promote the Party’s policies.” “Every believer must love their country along with religion. We must all contribute to achieving the goals set by the 19th CCP National Congress and general secretary Xi Jinping’s Chinese Dream. We must study hard and read the news more often,” the abbot preached to the gathered believers.

According to a believer at the temple, under China’s increasingly restrictive religious policies, on the first and 15th of each lunar month – the two days when pilgrims usually come to worship – the abbot no longer talks about Buddhism. He spreads the word of the CCP instead, lecturing pilgrims on state policies and promoting the spirit of the Party’s 19th National Congress.

“A temple’s survival today mainly depends on whether abbots and monks can effectively promote state policies. If they can’t, there is no value or meaning in the existence of this temple in government’s opinion,” the believer was frank about the current situation of Buddhists in China.

A monk from Quanzhou, a prefecture-level city in the southeastern province of Fujian, supports this sentiment: he thinks that the government aims to use temples to promote the “core socialist values,” laws, and regulations. His words are supported by a large number of activities organized by Buddhist temples that have nothing to do with religion. For example, on May 13, Jieguanting Temple in Quanzhou opened a photo exhibition about culture and the core socialist values.

The monk added that nowadays, Buddhists who have left home to become monks or nuns could no longer merely recite scripture and extol the virtues of Buddhism; they are also required to study national laws, regulations, and documents. According to him, abbots can no longer leave the premises of temples to hold ceremonies and ritual without asking for permission from the Ethnic and Religious Affairs Bureau; if they disobey – temples will be shut down.

Shushan Temple, located in Huwan town of Jinxi county, in the southeastern province of Jiangxi, was originally built as a royal monastery by Emperor Xizong of Tang (862-888) in the first year of the Zhonghe era (881-885) of the Tang Dynasty (618-907). The temple already underwent significant renovations in 1981. However, after a recent government-ordered makeover, the temple barely resembles a place of worship.

According to a local Buddhist, worshippers have been prohibited from some practices, like seeking advice by drawing divination sticks, at the temple since April. The Buddhist Association claimed that the practice constitutes “feudalistic superstition” and took away the cup for the sticks, threatening to shut down the temple if any violations are discovered. Political propaganda slogans have been posted all over the temple’s walls, highlighting the CCP’s control over Buddhism.

A poster “Xie Jiao-Free Religious Venue Information Officer Working System” has been hung on the wall in the reception hall. One of the regulations demands that the status of religious activities is regularly reported to the township government and a crackdown is waged against out-of-town personnel who freely carry out preaching activities.

“Standards for a Harmonious Temple,” displayed on one of the walls, calls to “support the leadership of the Chinese Communist Party and the socialist system, […] guiding Chinese Buddhism to actively follow a path that is compatible with socialism.”

“The CCP is materialistic and atheistic, so it persecutes religious belief,” said a monk in the temple. “They will gradually destroy religions. First, they restrict the content of sermons. Now, they are making temples promote the Party’s ideology and policies. In other words, they are demanding that religions obey the Party’s leadership unquestionably. In reality, they have turned religions into ‘communist faiths.’” 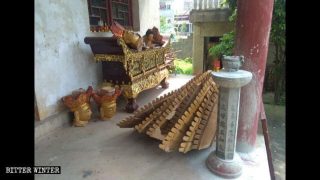 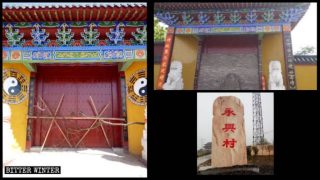