FAKE-DEMOS against CAG (Chinese Christians who fled to South Korea)

21 / 09 / 2018
On August 31, 2018, agents assigned by the Chinese Communist Party (CCP) organized some relatives of Christians from The Church of Almighty God (CAG) who had fled to South Korea from China, to hold a press conference at the Jeju Parliament under the pretext of “seeking for relatives.” They strongly requested the Korean authorities to deport the displaced Christians back to China. Between September 1 and September 4, Ms. O (吴某, Ms. Wu), a pro-Chinese Korean activist, recruited professional demonstrators along with some relatives of CAG Christians to stage false “spontaneous” demonstrations respectively at the CAG communities in Seoul and Chungcheongbuk-do, and before the Blue House, the executive office of the President of South Korea. During the demonstrations, Mr. Peter Zoehrer, an Austrian reporter and the executive director of the Forum for Religious Freedom Europe (FOREF Europe), was one of the witnesses on site. He witnessed the hateful representations of the self-styled demonstrators, and had interviews with some CAG Christians who are in South Korea. He stated that the CAG has been subjected to persecution in China, and that CAG members had fled to South Korea and sought asylum there for religious freedom. He also pointed out that it is the Chinese Communist Party that had disrupted their families, while The Church of Almighty God had not been responsible for family disruption.
Chinese Christians, RELIGIOUS FREEDOM, South Korea, The Church of Almighty God (CAG) 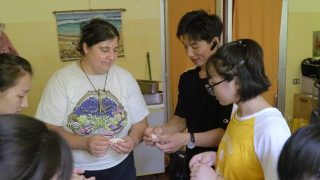