Under the CCP’s religious crackdown, Buddhist and Taoist temples are being demolished or forced to undergo a “metamorphosis.”

The crackdown on Buddhist and Taoist temples continue, according to multiple reports received by Bitter Winter from Hubei and Henan provinces. We receive these reports almost daily. Here are some examples we are able to document with pictures and videos.

As if it isn’t bad enough that government officials ordered the destruction of two incense burners and prohibited the burning of incense ever again at Momosheng Temple in Chahe town, under the jurisdiction of Honghu city in central China’s Hubei Province, they added insult to injury by turning the temple into a play-place. Officials ordered that two mahjongg tables be placed inside and a sign reading “Folk Culture Park” hung outside.

If these instructions weren’t followed, the temple would be demolished. This was in mid-January.

On April 19, more than 10 personnel from Honghu city’s United Front Work Department came to the temple to conduct an inspection and the temple’s owner was ordered to move out the Bodhisattva statues, remove the religious symbols outside the temple, and post political slogans above the temple’s entrance.

“Convert the temple into an entertainment venue and let villagers play mahjongg inside. There mustn’t be any more burning incense or worshipping Buddha,” the official told the temple’s owner, as local believers reported to Bitter Winter.

To avoid the temple being demolished, the temple’s owner didn’t resist and was forced to spend 6,000 RMB (about $ 870) to convert the temple. Seeing their place of Buddhist worship turn into a casino, believers were indignant, but didn’t dare say anything.

Temple forcibly isolated from outside world

In March, Jade Emperor Palace—a Taoist temple in Yucheng county in central China’s Henan Province—was listed by the government as a demolition target. Since the temple was popular with believers, local village officials were afraid of retribution and didn’t try to demolish it—they ordered the temple’s owner to do it himself; he refused.

Under pressure from higher levels of government, the village’s Party secretary finally negotiated and agreed with township government officials to block off the temple with galvanized iron sheets, in effect, hiding the temple from sight. It took five days to set up the barricades around the temple, at a price of roughly 90,000 RMB (about $ 13,000).

Taoist temple, built at a cost of 9 million RMB, sealed off

On April 20, Sanguan Temple, located in Chahe town under the jurisdiction of Hubei’s Honghu city, was also shut down. The temple was built in 2018 at a cost of nearly 9 million RMB (about $ 1.3 million) and funded by the temple’s owner and villagers. It survived less than a year before it was sealed off by the government.

That day, officials from the city’s United Front Work Department ordered the temple’s owner to remove statues of deities, under threat of demolishing the temple. The officials also prohibited people from burning incense, sealed off the entrance to the temple and demanded that the Eight Trigrams on either side of the entrance be removed.

The temple owner had no choice but to comply.

A local believer told Bitter Winter that the temple has continuously been cracked down on since last October. The local government ordered Sanguan Temple to be demolished on the grounds that its directional road stele was too close to the village committee premises. In order to preserve the road stele, which cost 100,000 RMB (about $ 15,000), the temple’s owner was forced to change the name “Sanguan Temple” on the stele into the name of the village “Yongxing Village.”

Video: The Chinese characters for “Sanguan Temple” on the stone tablet in front of the temple have been blotted out.

In Tingzu town under the jurisdiction of Hubei’s Ezhou city, the Buddhist Holy Shrine was painted white and converted into a private residence.

In mid-April, government personnel claimed the shrine was unlicensed and ordered the shrine’s owner to remove the incense burner as well as a small temple of the gods of the earth­­—which belongs to folk religion—in front of the shrine. To accommodate the orders, in hopes of preserving the shrine, the owner paid more than 10,000 RMB (about $ 1,500) to alter it.

According to local villagers, the shrine originally cost more than 1 million RMB (about 150,000) to build in 2011. Although the shrine’s owner applied for a permit, the government never approved it.

“Government officials demanded it, so there’s nothing that can be done,” a believer of the newly painted shrine said. “Doesn’t anyone who encounters a rabid dog (a metaphor for the lawless behavior of and inability to reason with government officials) have to sidestep it? If you’re obstinate with the government, you will suffer even more.” 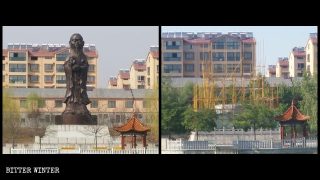 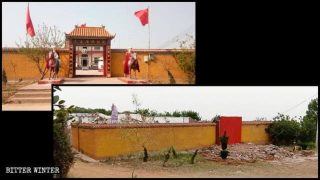 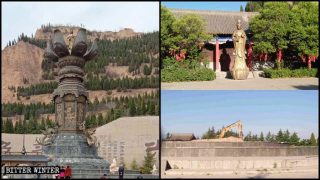