A Tibetan shopkeeper jailed for carrying a flag with a color photo of the Dalai Lama and other Tibetan figures at a festival in 2015 was released and returned to his family in Ngaba (in Chinese, Aba) at the weekend after serving his full five-year term, sources familiar with the case told RFA.

Sonam Dhargyal was released on April 4, and returned to his home in Sowa Village in Ngaba county.

“Outwardly he looks to be fine. But his family have decided to take him to the doctors for a thorough physical checkup,” said the source

Dhargyal was detained in Ngaba in Aprl 2015, two months after he attended the Monam festival at Ngatoe Gongma Monastery, where he carried a blue religious flag with a world peace symbol and a 8×10-inch color photo of the Dalai Lama, and two other prominent Tibetan exile figures, the source said.

“At the end of April that year, he went to Ngaba county to buy merchandise for his shop. It was there the Chinese police took him into custody at the market in the Ngaba county and sentenced him for five years,” said the source.

It is not known if Sonam Dhagyal had any legal representation when he was tried and sentenced. 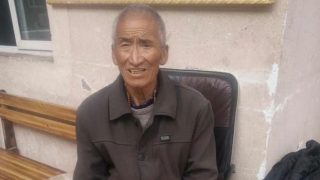