Next week, the head of Poland’s Supreme Court, Chief Justice Malgorzata Gersdorf, will go to work as usual, but her week is likely to be anything but normal.

Today, rules came into force that simplify the election of her replacement. This could effectively mean that her fob key might no longer work, her name plate would no longer be on her office door and she would be forced to clear out her desk.

If this is the case, it will represent the latest chapter in battle for control over Poland’s judiciary which has been raging for many months: a battle in which Justice Gersdorf has become a reluctant figurehead.

Judge Gersdorf was catapulted into the spotlight last month, after she defied a new law that reduced the retirement age of Supreme Court judges from 70 to 65. Nearly 30 Supreme Court judges were forced to retire, but, describing the changes as a ” purge of the Supreme Court conducted under the guise of retirement reform”, Judge Gersdorf turned up to work anyway. She was swept into the court house by a sea of supporters chanting “we are with you”, and has been coming into work ever since.

The European Commission launched legal proceedings to assess whether the reforms breached EU law, but in order to speed the purge over the Supreme Court, the government pushed through a further judicial amendment. This amendment, which reduced number of justices who needed to be present when a new Supreme Court President is elected, came into effect at midnight.

Judge Gersdorf has been one of the main targets of the government’s campaign against judges since 2016, when she first expressed her concerns over the future of the rule of law in Poland. She has been repeatedly attacked in the pro-government media and, in March 2017, a group of 50 MPs from the governing Law and Justice party requested that the Constitutional Court examine the legality of her appointment.

There is something particularly alarming about the erosion of the Supreme Court’s independence in Poland. Through its latest “reform”, the government has effectively put all arms of the judiciary – including the Constitutional Tribunal, National Council of the judiciary and common courts – under political control.

The amendment of the Law on the Supreme Court not only replaces more than a third of the current judges; it also introduces a powerful stick with which to beat the judiciary as a whole. Under the amendment, a new Disciplinary Chamber will be created, most likely later this year. Its members will be elected by the politicized National Council of the Judiciary, and its “lay judges” will be elected by members of the Senate.

Many fear that once the Disciplinary Chamber is in place, a series of disciplinary proceedings will commence against judges who have ruled against the wishes of the government in politically sensitive cases.

Judge Gersdorf shares these concerns. She expects a wave of disciplinary cases and removals and warns that the judiciary must not show fear. “We must stay united in the defence of democracy and independent courts,” she says.

On 2 August, Poland’s Supreme Court turned to the European Court of Justice (ECJ) to request clarification as to whether cutting short the tenure of the judges who have reached the age of 65 years is in line with the EU law.

“Whilst the current government has displayed a reckless determination to undermine judicial independence and overturn mechanisms for protecting rights, the people of Poland are taking a stand”

This case is not without precedent. In 2012 the ECJ ruled that an attempt to force judges to retire at the age of 62 by Viktor Orbán’s government in Hungary had breached age discrimination laws. Hungary subsequently changed the law on compulsory retirement of judges, introducing a 10-year transitional period for the new retirement age of 65.

Even if Judge Gersdorf is forced from her job, she is unlikely to disappear from public life. Support for her in the country is strong, with large protests held in Warsaw demanding an end to interference in the judiciary. A recent poll by the Instytut Badań Rynkowych i Społecznych found that she is the fourth most trusted person in the country. This week an open letter signed by prominent law professors from around the world stated that “Professor Małgorzata Gersdorf is the only person authorized for the seat of First President of the Supreme Court.”

Whilst the current government has displayed a reckless determination to undermine judicial independence and overturn mechanisms for protecting rights, the people of Poland are taking a stand. They have found a champion in Judge Gersdorf who refuses to remain silent and who continues to challenge those in power.

This article was first published in Newsweek. 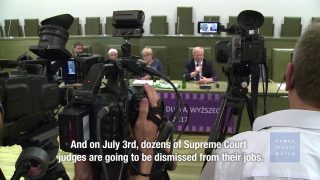 The US Has a Stake in Poland’s Democracy