Three government-approved Protestant churches have been destroyed in Shandong’s Linyi city for various made up reasons.

At the beginning of May, a State Administration for Religious Affairs inspection team visited the eastern province of Shandong to investigate the status of religious affairs. In preparation for the visit by the higher-ups from Beijing, local governments have been carrying out investigations and crackdown campaigns in their jurisdictions. Three Three-Self churches have been demolished in provinces southern city of Linyi.

Blown up for being “too luxurious”

Mazhuang Church in Lanling county didn’t have a chance to serve its purpose – it was still under construction when authorities blew it up on May 3.

According to congregation members, the construction of the church began in April 2017 at the cost of more than 1.5 million RMB (about $ 230,000) – the money donated by the members of the church. The director of the church applied for all necessary permits but never received them. This has served as the pretext for the local government to destroy the church – they declared it illegal.

The church’s cross was dismantled already in March. On May 3, a group of officials came to the church to oversee its demolition. The police cordoned off all surrounding intersections, prohibiting passersby from approaching and taking photos. The government-hired demolition team first used explosives to blow up the church’s pillars and then demolished the church itself. In just three days, the church was razed to the ground. Five vehicles hauled away the ruins overnight.

The impressive Western-style architecture of the church must have threatened the authorities. According to local officials, the church was “too luxurious,” more majestic than government buildings. “The state puts much effort into raising funds. How could those who believe in God be so united in their efforts to build the church?” a government official was puzzled.

County and town officials were reluctant to demolish it: They wanted to keep the building and repurpose it to be used as an apartment building for the elderly or a cultural club. However, the provincial government ordered the church to be demolished, a useless act that has cost approximately 100,000 RMB (about $ 150,000).

A member of the church said that before the demolition, CCP officials threatened and intimidated the pastor, ordering him to obey the government, or his pastoral qualifications would be revoked, and his son dismissed from his government job.

Only a wall remains

On May 4, a church in Lanshan district, built seven years ago, was demolished because it “violated building laws,” officials claimed.

That day, more than 20 government personnel arrived at the church. When a few elderly believers refused to leave, urban management officers threatened to beat them if they disobeyed. A few hours later, the church was demolished, only one wall remained standing.

Authorities started pressuring the church already in March. Later in the month, its cross was removed, and in April, the local government ordered to tear down the whole church.” The congregation disagrees with the government’s claims that the church was illegally built – they say that the foundation for the church has already been laid down when it was purchased from a real estate developer.

Chasing away the “American God”

A Three-Self church in Luozhuang district was still undergoing reconstruction when local authorities started harassing it. The original church was demolished some time ago and was relocated to a new place, where a developer started building the church in February. A two-meter cross has already been made to be placed on the church’s roof.

However, on March 10, town government officials suddenly put a halt on the construction, claiming the building of the church was too tall. Teamed up with the local police, they first destroyed the cross that was ready to be installed, alongside the iron block on which the cross was supposed to be placed. In mid-May, officials ordered the developer to cease the construction work, chased away the building team, and blocked off the church with a net. The church’s fate is now uncertain.

The district’s authorities came up with even more ridiculous reasons for destroying churches. A local preacher told Bitter Winter that recently, he attended a meeting on religion, during which, to his surprise, officials from the United Front Work Department stated that the God so many Chinese people believe in comes from America. Since the relations between China and the United States are not the best now, if the two countries go to war, with so many people believing in Jesus, they could go against their government. That is why religion is detrimental to the country, and the CCP must hurry in cracking down on it. 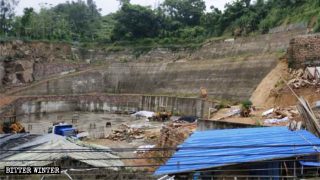 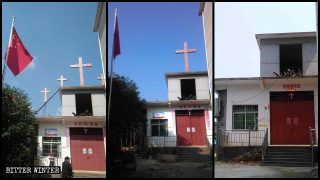