The third in a series of three articles about an incident used by CCP propaganda to justify its persecution of The Church of Almighty God.

This August, an incident happened inside an entertainment facility in Shijiazhuang city in the northern province of Hebei. A citizen in mainland China was kicked to the ground and badly beaten for his remarks supporting the pro-democracy protest in Hong Kong.

The assailant said, “Both newscasts and reports online call for not being soft on the separatists seeking an independent Hong Kong. As far as I know, that’s why the police beat those separatists, and nobody is being held accountable for it.”

A propaganda machine, which manages to manipulate over 1.3 billion Chinese people, is doubtlessly horrific, as it can justify all suppressions, turn masses into helpers of the government, and make them act as the regime’s instruments in carrying out suppression. In fact, that’s why the CCP never stops fabricating fake news while suppressing dissident individuals and groups and religious communities.

As we reported in the first and second article in this series, in October, pro-CCP state-run media extensively spread fake news against The Church of Almighty God (CAG), falsely blaming the Church for a multiple suicide case in May, where four members of a family died in weird ways and three bodies were stacked in a freezer in Shenzhen city of the southeastern province of Guangdong. Just like other fake news fabricated by the CCP, this one was timely debunked by Bitter Winter.

However, while such blatant lies are difficult to sell abroad, citizens in mainland China are kept under a total information blackout. Bitter Winter interviewed some CAG believers who reported how the fake news affected their lives.

“Because of the ridiculous fake news, my family began to oppose my faith. It’s getting more and more dangerous for us to have gatherings, because our neighbors, security guards in residential communities, and even our family members would report us to the police for that. It’s now something rewardable to help get CAG believers arrested,” a CAG member in mainland China said. “The fake news the CCP created to slander religious groups are usually characterized by a bloody, violent, and absurd story and a bloodcurdling title, but no one really cares whether the story is true or not.”

According to the CCP’s propaganda organs, pro-democracy protestors in Hong Kong are “rioters,” “young losers” who are filled with anger toward the reality, and ungrateful “separatists” who betray their motherland; religious groups not approved by the regime are often accused of being related to some bloody and eerie criminal cases; Uyghurs are regarded as “terrorists” who may destroy people’s happy life at any time… And with these “accusations,” arresting, detaining, punishing and even killing them is constructed as a honorable thing to do. Consequently, here come rewards offered for informants, transformation through education camps, torture, and justified violent suppression.

In Nazi Germany, the persecution of Jews was presented as a just cause by the regime mouthpieces controlled by the then propaganda minister Joseph Goebbels (1897-1945). A commentator has compared the CCP’s cultural and propaganda institution to Nazi Propaganda Ministry, and pointed out that the former’s artifices almost equal that of the latter.

For example, during the “Great Leap Forward” movement in 1958, lies exaggerating grain yields (claiming that the grain output per mu, about 0.16 acre, could reach 5,000 kilograms) overflew in the whole country and directly resulted in a famine lasting three years, during which over 30 million people were starved to death. While suppressing the students’ movement in 1989, Tibetans, and Falun Gong practitioners, the CCP played the same old trick­­—making and spreading fake news through its propaganda tools. Consequently, thousands of students were slaughtered, over 4,000 Falun Gong practitioners were persecuted to death, and hundreds of thousands of Falun Gong practitioners were illegally subjected to forced labor or sentenced to heavy jail terms. Fake news against the CAG has tried to justify the death of over 100 CAG members, who died either in jail or for the consequences of torture. This year alone, more than 10,000 CAG members have been arrested. Clearly, the CCP’s cultural and propaganda organs have proved to be a killing machine.

Anti-xie jiao content in textbooks at China’s schools.
During the Nazi reign of terror, the Propaganda Ministry under the leadership of Goebbels, included anti-Semitism into all possible forms of communication. Posters and leaflets promoting Nazi policies were being strategically posted everywhere, especially in places with heavy pedestrian traffic, including squares, subway stations, bus stations, and schools, so that the propaganda caught people’s attention, whether they liked it or not. Anti-Semitic readings for children, compulsory listening of radio broadcasts, infamous anti-Semitic movies, and other ubiquitous propagation paved the way for the following massacre of Jews. The scheme of the Nazi propaganda included: spreading lies systematically; controlling and suppressing any criticism; creating a personality cult of the Nazi leaders; subjecting Germans to forced indoctrination; and implementing extremely brutal purging methods.

It seems that the CCP’s propaganda organs have learned the main lesson from the Nazis. 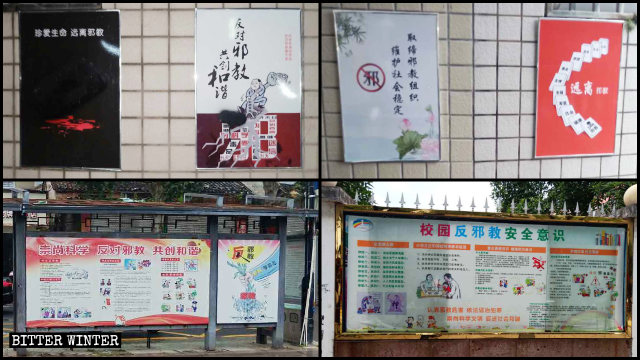 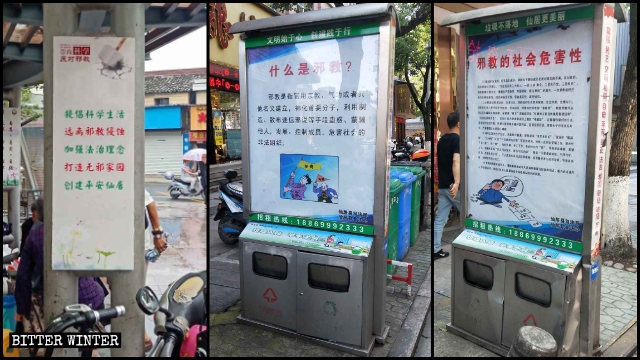 Walking on the streets in China, one will see bulletin boards with notices and slogans against the CAG and other groups persecuted as xie jiao here and there, with various bloody and horrific illustrations and terrifying titles. Propaganda against the CAG can also be found printed on shopping bags and hand fans that are distributed widely. Besides, LED screens used by merchants to promote their services and goods were also used to display anti-CAG propaganda 24/7 as requested by the government, and there are now even anti-xie jiao roads, anti-xie jiao theme parks, and anti-xie jiao drama performance.

The CCP is by no means protecting “orthodox” Christians from the competition of “cults,” as some naively believe. In fact, the religious groups suppressed by the CCP and sometimes labeled as “xie jiao” are those independent from the Party’s control, developing rapidly, and with numerous members. Their existence makes the CCP feel threatened, and the reaction is violent.

“The CCP is very likely to use this case for paving the way for further crackdowns on all religious beliefs,” a house church preacher who asked not to be named told Bitter Winter commenting the Shenzhen family incident. “The state-run media’s reports this time are not only targeting The Church of Almighty God. All those reports unanimously highlighted Qian Xude’s disorderly religious life, which started ‘after he left the Three-Self church,’ and all emphasized that he took a wrong path by joining a ‘privately-established meeting venue.’ In fact, the government has mentioned many times that ‘house churches are not under the CCP’s control and are more likely to be infiltrated and invaded’ in its meetings and propaganda, and had closed house churches in large numbers under that pretext.”

The preacher suggested that the different persecuted religious groups should not care for themselves only. He added that in this case the CAG was falsely blamed, and that honorable Christians should debunk the fake news about all persecuted religious movements notwithstanding their different theological positions.