A treaty signed by China and Nepal in October 2019 that manages border controls between the two countries poses significant threats to Tibetans fleeing their homeland to escape Chinese rule, Tibetan advocacy groups and other sources say.

The agreement on a Border Management System, signed during Chinese president Xi Jinping’s visit last year to Nepal, commits both countries to hand back, within seven days of being detained, persons found crossing the border illegally, the Washington-based International Campaign for Tibet (ICT) said in a report this week.

“This could result in Tibetans who try to escape to freedom being sent back to the repressive rule of the Chinese Communist Party,” ICT said.

Meanwhile, a Treaty on Mutual Legal Assistance on Criminal Matters signed in October may expose Tibetans living in Nepal to danger for exercising their freedoms, already sharply restricted in Nepal, to express their distinct cultural identity or voice political views opposed by China, ICT said.

“Given China’s influence on the less-developed Nepal and the obvious power imbalance between the two countries, there are worries that Nepal may disregard legal protections for Tibetans while responding to Chinese requests under this treaty,” the rights group said.

Details of the two agreements were recently brought to light when Nepal’s foreign minister Pradeep Gyawali offered written clarifications on their provisions to members of the country’s parliament, ICT said.

Meanwhile, many fear that China and Nepal, which shares a long border with Tibet, may soon sign a treaty on extradition, further endangering Tibetans currently living in Nepal, sources say.

‘We are very worried’

Speaking to RFA’s Tibetan Service, Kapil Shrestha—a human rights activist and political science professor at Tribhuvan University in Kathmandu—said that Nepal has been “tremendously influenced by Chinese pressure and policies” in recent years.

“We are very worried,” Shrestha said.

“Nepal’s government has enacted very undemocratic and draconian measures in curbing Nepal’s media and human rights in general,” he said, adding that the possible extradition of “so-called offenders” from Nepal to China would target the Tibetan community in particular.

“Although the general agreements may not cite an extradition clause, if we look at all of the agreements’ provisions in detail, there are reasons for concern,” added Nepalese social and political activist Arun Subedi, speaking to RFA.

Also speaking to RFA, Gajendra Basnet—the Nepalese journalist who broke the story of the signed treaties in the online news web portal Khabarhub—said that Nepal’s new Border Management System would not likely affect the lives of Tibetan refugees in Nepal right away.

“But it is sure to limit their activities in the days to come,” he said.

Many Tibetans living in Nepal already fear monitoring by police, with some approached by RFA’s Tibetan Service for comment agreeing to speak only on condition of anonymity.

One, a resident of Kathmandu calling herself Tenzin (not her real name), said that she used to believe that Tibetans living in Nepal would be safe as long as they stayed away from political activities.

But during Chinese president Xi’s visit to Nepal last year, “I felt what it is really like to have no country of your own,” she said.

“The Nepalese police would stop by [Tibetans’] houses and shops and probe into things,” she said. “And anyone found in possession of things bearing symbols of Tibet, such as Tibetan flags or clothing, would be arrested.”

“The Chinese government has constantly insisted that Nepal recognize Tibetans as Chinese citizens, thus pressuring the Nepalese government to refuse to issue legal documents to Tibetans showing them as refugees,” added Sangpo, a local Tibetan assembly chairman and resident of Pokhara, Nepal, since 1959.

Many have no papers

Around 3,000 to 4,000 Tibetans now live in Nepal without legal papers, sources told RFA, speaking on condition they not be named.

The number of Tibetans escaping into Nepal from China has meanwhile plunged in the last 30 years, from a high of around 3,000 crossing the border each year from 1985-86 to 2008, to smaller numbers each year after tighter border controls were imposed following widespread protests in Tibet in 2008, sources said.

The U.N., European Union, and United States have urged Nepal’s government to protect the rights of Tibetans living in Nepal and of refugees fleeing across the mountains from Tibet, with a spokesman from the United Nations High Commissioner for Refguees (UNHCR) in Geneva calling “on all States to adhere to the globally recognized principle of non-refoulement that prohibits countries from expelling or returning people to a territory where their life of freedom would be threatened.”

The U.S. Congress’s Tom Lantos Human Rights Commission meanwhile said in a Nov. 20, 2019, letter to Nepal’s ambassador to the United States that extradition, while a legitimate tool of international law enforcement, “should not be used to send people to a country where they would be at risk of serious human rights abuses.”

“Recognizing the [People’s Republic of China’s] long standing repression of Tibetans within its borders, we feat that an extradition treaty would be used by that government to persecute Tibetans living in Nepal,” the Lantos Commission said.

“The United States views the safety and human rights of Tibetan refugees in Nepal as an issue of great importance,” added the U.S. State Department in response to an RFA request for comment.

Meanwhile, “under mounting pressure from China,” Nepal has blocked U.S. moves to bring Tibetan refugees to the United States under the terms of the Tibetan Refugee Assistance Act introduced by Congress in 2006, ICT vice-president Bhuchung Tsering said, speaking to RFA.

“In order for Tibetan refugees living in Nepal to qualify to leave for the USA, they need an authorization letter and exit permit from the Nepalese government, and these have been denied to them,” Tsering said.

Nepal cites its growing economic ties with Beijing, with promises of millions of dollars of Chinese investment in Nepalese development projects, in cracking down on Tibetan activities in the country, including elections in the refugee community and birthday celebrations for exiled spiritual leader the Dalai Lama.

Xi Jinping’s Oct. 12-13 visit was the first to Nepal by a Chinese president since 1996, and followed a day-long visit by the Chinese leader to India that saw at least 15 members of a Tibetan exile organization detained for planning protests. 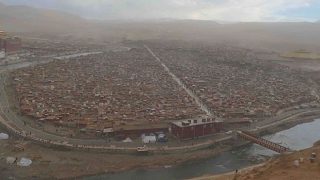 Tibetan Nuns Beaten by Chinese Guards For ‘Weeping’ in Detention 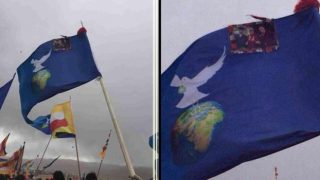