A torchlight procession for peace in Rho requested the Italian government to welcome the victims of religious persecution.

In the late afternoon of Friday, January 18, a Torchlight Procession for Peace took place in Rho, a town on the northwestern edges of Milan, which hosts the famous exhibition pavilions of the Lombard metropolis. It was organized by the Council of Migrants of the Municipality of Rho, the Mayors of the Pact of North West (an initiative to coordinate some of the mayors of Lombardy, Piedmont, and Liguria), and AVIS, the largest Italian organization of blood donors. 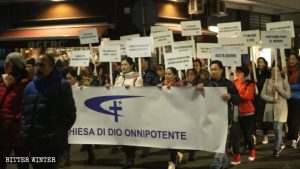 Amid the intrigued glances of passers-by, a silent parade wound down the streets of the town, illuminated only by the torches brought by the demonstrators. No singing, no slogans. In fact, only signs were designed to speak. Among the marchers were representatives of the Rho Oasi Multicultural Association, the Islamic-Arab Cultural League, and, above all, the Chinese exiles of The Church of Almighty God (CAG), the largest and most persecuted Chinese Christian new religious movement, with their unequivocal messages directed to the CCP and to the whole world: “No religious persecution,” “Fight against the CCP tyranny,” “Democracy and freedom,” and “We want peace, not persecution.”

The parade then unleashed into the Municipal Auditorium “Padre Reina,” where, after a reception, a concert took place, and some mayors of the area took the floor – first of all, Pietro Romano, the mayor of Rho – mostly interpreting the theme of peace focusing the attention on the issue of the reception of migrants, thus basically criticizing the reforms proposed on the matter by the new Italian government (in office since June 1, 2018, following the elections held on March 4), or the so-called “Security and Immigration Decree” (Decree Law No. 113 of 4-10-2018 converted with amendments into Law No. 132 of 01-12-2018). 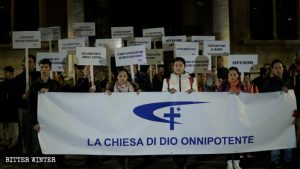 In Italy, the “Security Decree” is at the center of a lively debate, which concerns us here only in the part relating to the current and possible consequences for asylum seekers fleeing from China. Title I (Articles 1-15 ter) of the Decree deals with the “Provisions on the issuing of special temporary residence permits for humanitarian needs as well as on international protection and immigration.” This is not a matter of obtaining refugee status, for which earlier legislation remains in force, but rather the temporary humanitarian protection, to which Chinese refugees have often resorted. Six cases that entitle for temporary humanitarian protection are listed: medical treatment for exceptionally serious pathological situations; social protection for victims of violence or exploitation; protection of those who have suffered domestic violence; exceptional disasters that prevent the aliens from returning and staying in their country of origin in safe conditions; acts of particular civil value (having substantially a rewarding value); and the non-acceptance of the application for international protection vis-à-vis the impossibility of expelling the applicant for the risk of subjecting him to deprivation of fundamental human rights.

The most significant limitation of the decree lies in the fact that it does not explicitly mention persecution for religious reasons. Only from the last of the six criteria provided for by the “Security Decree” it is, in fact, possible to infer a reference to religious persecution, alongside the persecution for reasons of race or sex, but the reference is only indirect. 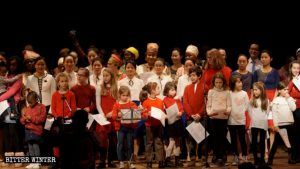 In short, the Decree contains a reference to religious persecution, but it can be seen only a little, only very little. To make it the illuminating beacon of the policy of welcoming migrants in Italy is, therefore, difficult at least.

Instead, the Rho torchlight procession reiterated, with the calm that is the virtue of the strong, that just religious freedom must be the first, albeit certainly not the only, criterion for establishing who has the right to asylum and protection. But in order for it to happen, we need a complete change of the paradigm, a profound cultural transformation of Italian society and, therefore, of Italian institutions. And that this is not a confessional request it is testified by the daily work of activists and organizations, including secular people, in favor of the full respect of human rights that without hesitation places religious freedom at the first place of their commitment. 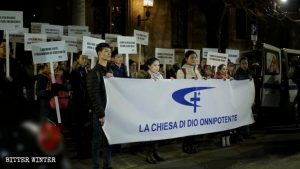 To remind about this in Rho, there were the members of The Church of Almighty God, who today undergo the harshest repression in the context of the war on all religions in China, including those approved by the government, which the communist regime conducts, while, substantially, the world looks elsewhere.

The downplaying of the persecution in China, and especially that of the CAG, is after all a great favor made to Chinese totalitarianism by those Western countries that, while ruling on asylum applications, welcome uncritically (even if now there are scientific means of effective contrast) the fake news produced and disseminated by the Communist regime in Beijing. 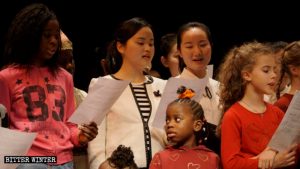 In Rho, the parade of the CAG during the Peace Torchlight Procession of the mayors has dramatically reminded that in Italy the arrival of refugees does not only mean boats and smugglers; above all (and I say above all because too few emphasize it), it means religious freedom and persecution (among others) of Christians. Until this criterion is not clear to those who are called to distinguish true refugees from other types of migrants, the risks of returning the faithful of the CAG to the government that repays with violence, torture, and even death for the simple desire to believe in God and live accordingly in the open, will repeat themselves.

It happened blatantly in Angela Merkel’s Germany, despite the international mobilization of nine NGOs. Canada, New Zealand, Sweden, and some jurisdictions in the United States welcome applications for protection of refugees from the CAG, and some recent rulings do the same in Italy, while the situation remains very difficult in Japan and South Korea, where CAG asylum seekers are numerous, and so far, none of their applications have been accepted.

In Rho, the exiles of The Church of Almighty God have expressed, with gentleness and firmness, gratitude for the country that already hosts them and sincere concern that Italy should not enter the list of the countries that, wanting to legitimately make order in the current chaos that is migration, end up rejecting even the refugees who leave their country to escape religious persecution, confusing the persecutors with the persecuted.

(Lawyer Roberto Respinti provided consultations on the legal aspects discussed in this article).