Milan, CAG Exiles Take to the Streets to Say “Enough”

On Monday evening, members of The Church of Almighty God took part in a peaceful demonstration on the occasion of the 70th anniversary of the Universal Declaration of Human Rights to remind the world that faith is not a crime.

On the evening of December 10, several Chinese exiles that belong to The Church of Almighty God (CAG), the most persecuted religious group by Xi Jinping’s communist regime, took to the streets of Milan to send the message about the violence and torture against believers in China.

It was the 70th anniversary of the Universal Declaration of Human Rights, to which even despotic China subscribes. In several Italian cities, ActionAid Italia, Amnesty International Italy, Caritas Italiana, Emergency, and Oxfam Italia organized torchlight marches of solidarity and support for all persecuted people in the world. The members of The Church of Almighty God who escaped the persecutions to Italy wanted to get the most of this opportunity and bring their case to the fore. Thus, that Monday evening they marched alongside other heterogeneous and diverse groups, which voiced different agendas, even political, from the claims of millions of persecuted believers in China who’s wish, like the CAG’s, is to have the fundamental right to live their lives as people of faith.

In fact, the case of CAG being undoubtedly among the most gruesome, the Chinese regime does not engage in discussions or rankings of approval of theological nature. Nor does it ask the tormented exiles who is walking next to them in a peaceful demonstration. In China, all religions are persecuted, both the ones that are unwelcome by the regime, and, thus, officially banned, and those controlled by the government and “allowed” but nonetheless cumbersome; both traditional beliefs and new movements; both mainline and minority beliefs, or even niche creeds. The biggest, real problem of the Chinese Communist Party is and remains God, which is why its repressive egalitarianism makes no difference. They are all guilty.

On Monday evening, starting from 18:30, Milanese people had an opportunity, even if only for a few moments, to open their eyes on a reality as much distressing as forgotten, thanks to the courageous witnesses of the CAG who, challenging a regime able to follow their traces everywhere, even abroad, wanted to parade with a strong and clear message. “Faith is innocent,” read candidly and beautifully one of the slogans written on their signs. That’s right, but perhaps that’s precisely why men and women of faith are indigestible to a regime that has never known innocence. 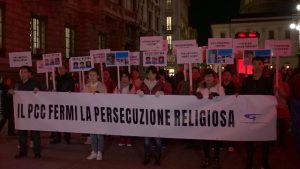 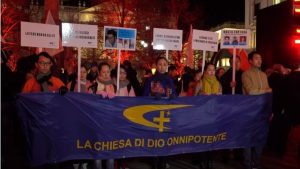